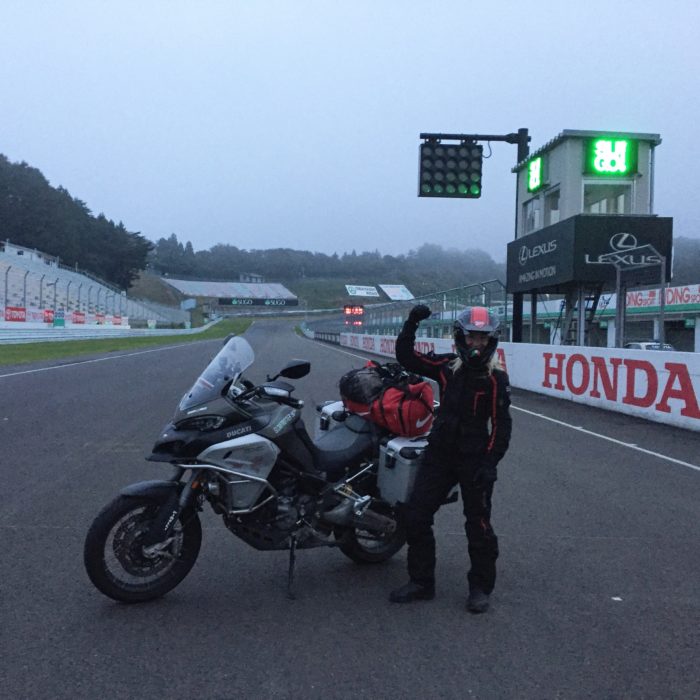 A day with a rollercoaster of emotions. The ride up to Mount Zao was super relaxing, the broad and perfect asphalt made me go into a touring mental state and I got treated on the first views of the fall colours of Japan. I’m still a bit too early but the mountain slopes look as if they are on fire. At the top I get lucky, I’m able to see the water reservoir on the bottom of the crater. This happens only one in ten visits I’m told, so maybe my luck is turning here in Japan ;). From here Mark’s and my path split, he has to return home and I need to go to Sugo.

The roads up to Sugo remind me of the area of Spa-Francorshamps back at home, Sugo is also a mountain track with some descends and a steep hill. When I drive up to the parking lot I can already smell the tension. Racetracks have an aura of their own, the passion of millions of spectators and thousands of riders seem to penetrate the area with a certain kind of adrenaline and the overwhelming joy of victory. I love it and when I remove my helmet the sound of the cars on the track brings tears to my eyes. The engines revving up and the small explosions after the quickshifter kicked in. Man, I love the tracks.

The staff kindly welcomes me and I get a briefing about Sugo’s history. This all is too interesting, as with the Iwashita collection, to only write three or four lines about so I promise you a full blog about Sugo itself. For now, everyone at the track seems to know why I am here. Foggy. It seems as if Foggy has been chasing me around Japan for a reason, maybe now the rain will leave my butt alone now that I’ll honour him for his victory at Sugo. Just kidding, Carl Fogarty won the WSBK in 1998 on a Ducati 916 right here at Sugo. The staff really likes building up to the big moment because I get to watch the races again on YouTube, it’s worth it. Type in ‘ WSBK 1998 Sugo Race 1 ‘ and you’ll get to all the clips.

And then, bam! Troy Corser on the screen! I’m startled, he’s only 26 years old at that time, defending his chances to become the Champion and during the warm up laps in the morning he goes down and breaks three ribs. I can’t even begin to imagine where his disappointments, frustrations and grief must have begun and ended that day. It’s funny how lives are entangled with brief interactions, I met Troy last year at the Cosmic Nozem Motorshow in Belgium. Bart, Kenzy and I had set up a small gymhkana course for mopeds and Troy drove it whilst wearing Barts jacket. Now a year later, I’m in Japan watching young Troy go down defending his championship points. It’s a funny unpredictable thing that is called life.

Another strange thing is that previously I could not understand people watching old videos from races. You know what’s going to happen so where is the fun. But with now being here, hearing the tensions in the voices of the riders in ’98, the fans going crazy, seeing those (now old) superbikes wobbling around in the corners and the riders still have to rev matching and downshifting on their own, I get pumped and get to cheer along for Fogarty too.

Then the big moment arrives, I get to drive Sugo myself. It’s been five years since my last trackday and as soon as I ride into the paddocks and onto the track tears are streaming down my cheeks, I had no idea I missed this so much. The watery eyes soon disappear because I thought the pacecar I had to follow was going to go real slow, like motorcycle with luggage slow, but hell no. He took on a cool pace so I could even lean into the corners a bit. The laps were over way too soon and ended in the pitch of night again but they energised me like a Duracell bunny.

After the farewells I got going again, there was a hotel in Shiroishi I could get to at a reasonable time. But as soon as I hit the road, in the back of my head I was riding along the shadows of legends on a packed Multistrada Enduro somewhere in Japan with music screaming in my ears, the starry sky high up looking down on me and the warm breeze after a hot day gets me going. I know a place by a lake where ill be able to pitch the tent. The night is still young, the Multi wants to go and I just ride, ride, ride… 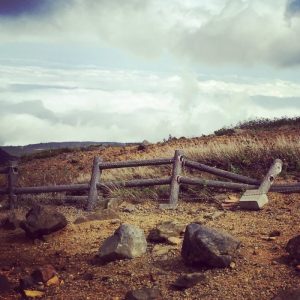 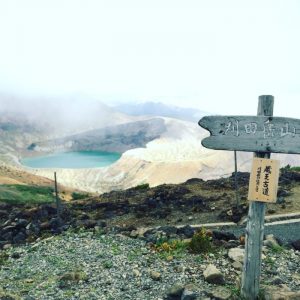 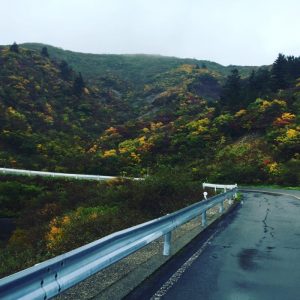 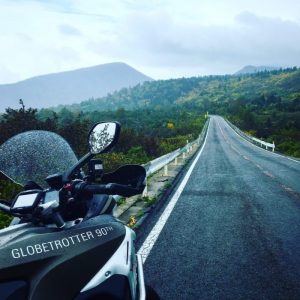 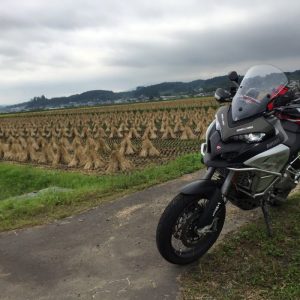 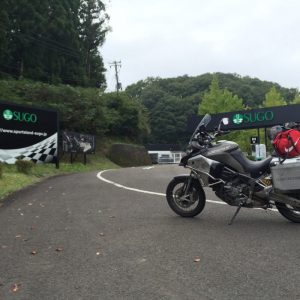 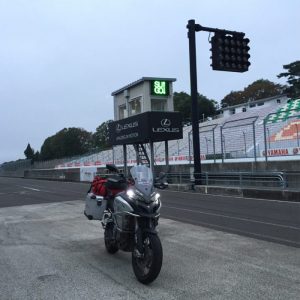 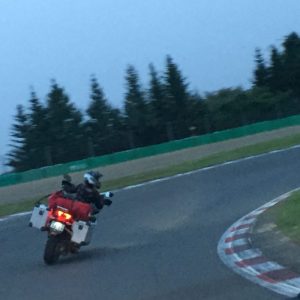 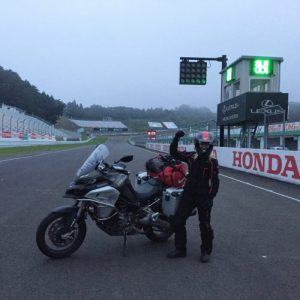 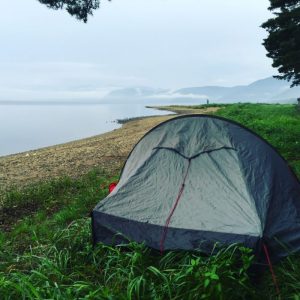 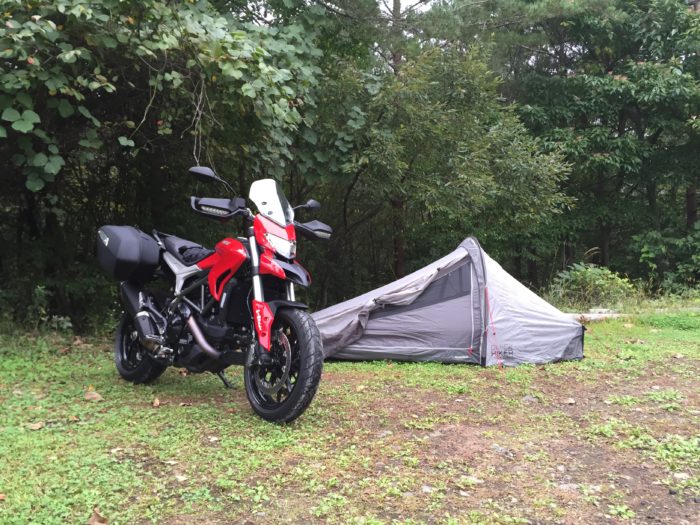 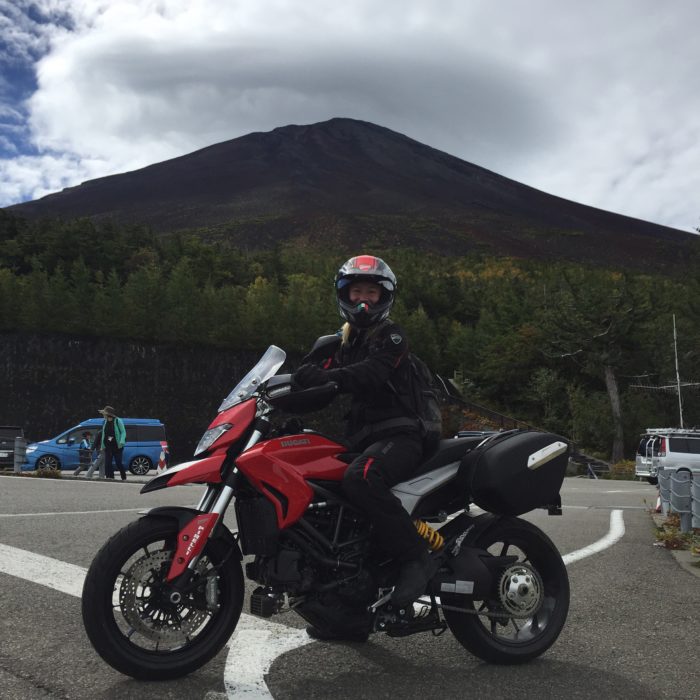 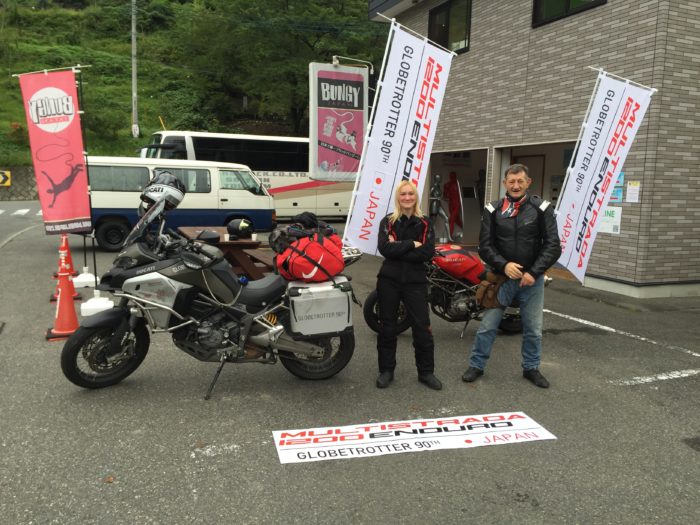 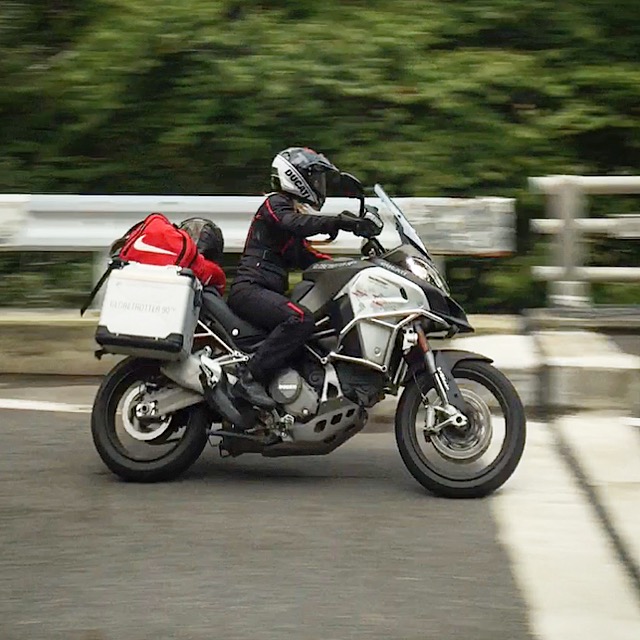