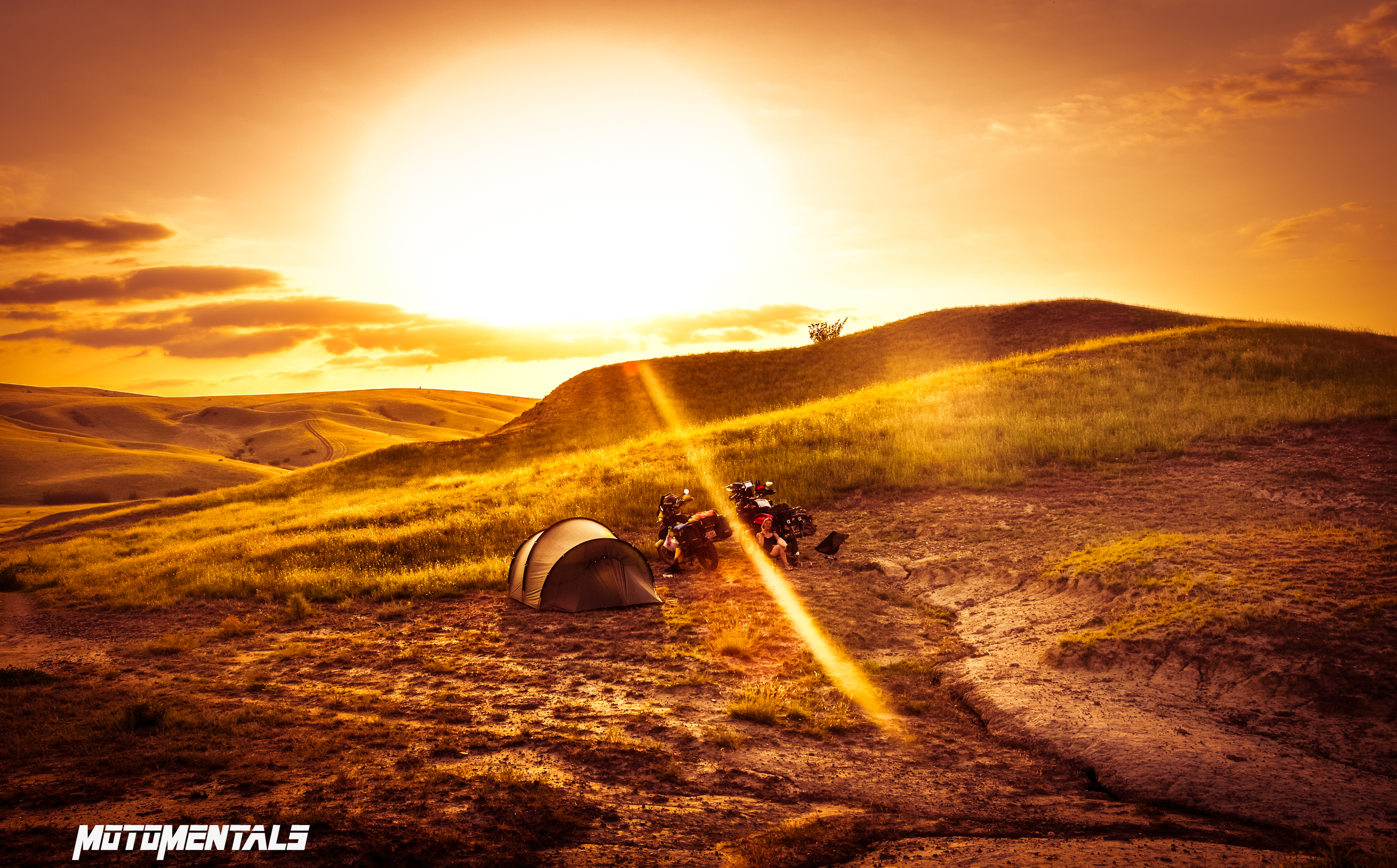 We’re at the capital of Georgia, Tbilisi. Hyperion his swingarm broke near a campsite some days ago and that got us stranded in this crazy busy city for a couple of days. It got us into doing stuff we’d normally never do ; sightseeing like the tourists strolling in the city and taking a cab back to our tent in the evening. Needless to say we didn’t even mind taking pictures, it’s just not our style, all we wanted was to get out. Back into the wild and on our bikes. And when the new swingarm arrived, we celebrated, the Georgian way.

I’m barely alive after my small but fierce love affair with the famous Georgian hangover. My head still hurts, my mouth is dry and the heat is already upon us. We’re ready to leave the campsite but Jeku’s bike, Hidalgo, has a dead battery and refuses to start even when towed. A giggle escapes my mouth because it seems that Tbilisi has no intention of letting us go. It’s very typical, you’re all geared up, ready to go and one of the bikes says “Nah, don’t you think after ignoring me for five days you’re getting me that easy to carry you again, you gotta work for it babe.” Sweat is already pouring down my back, even in the morning the temperatures are high this time of the year and I felt so baby fresh clean after the luxurious hot shower from yesterday’s evening. We try the whole lot to get Hidalgo starting and eventually with jumpstarting him through Hyperion’s battery, he makes a roar. The lady we met, taking care of the campsite, comes running over with her hands held high, cheering on, since she knew we were anxious to leave. I hear Jeku laughing over the intercom when he takes off to the road, “Back on the road, love.” I’m not sure if he’s talking to me or the bike.

It takes a while -to our standards- to get out of the capital and get rid of the traffic but after some forty minutes of riding, we’re back were we belong. Out in the open. Our wheels are guiding us towards the Iori Highlands. We left Belgium, as always, with zero expectations and, as always, we were not disappointed by what we found. It can sometimes be frustrating to travel without a sense of direction or a plan but most of the time it’s very rewarding. If there is no time pressure, you can go wherever, whenever. When we reached the highlands, I crossed some of the MotoBirds, it’s funny how small the world is. With the extra time due to the breakdown, I was on social media a lot and some of my lady friends were doing a guided tour in Georgia. And I crossed them on the same trails! With Hyperion, my head clearing up from the remains of the fog of the Georgian cha-cha and all my excessive luggage with me. Even though they have no frigging idea who I am, I’m waving at them as if I crossed my best friends. It gave me a happy boost.

The scenery the Iori Highlands offers us is remarkable. The trails aren’t that challenging so we have plenty of time to relax and enjoy the ride. This is why we ride.

Riding on towards the evening we notice carved out cities in the walls of the hills, like the ones we saw in Turkey the last few weeks. We know by now they are actually the hideouts of the first Christian people in this region. They dug out entire cities in the hills, it was a strategical move to defend but also a way of hiding because the belief was not that popular at the time. Jeku asks if we can stop for the night, he wants to check out the hills and get a fresh start in the morning. I happily agree, within the next ten minutes we find a good place to stop with enough history to explore. Starting our normal evening routine with setting up our tent, kick out our gear and crack open a lukewarm beer I’m starting to feel at home again. I’m nibbling on some chips when Jeku says he’s going to check out the old places. And I’m like “Yeaaaaah, you know, have fun. I’ll keep an eye on you from here.” So he sets off, in his underwear and slippers, carrying the camera and an extra lens for it. As promised I crack open another beer and keep an eye on him whilst he’s hopping around the field like a bunny and then starts climbing the hill. At a point I almost can’t see him anymore, so I get my point and shoot camera out and start zooming in. I’m pissing my pants laughing seeing him climbing the wall with both hands and the camera on his back. Yeah, you’re guessing right, where did he leave the spare lens then if he was in his underwear? I see him getting into the caves and disappear for a while, so I put down my small camera and let all that happened during the past days play around in my mind. I like reminiscing about everything and nothing, it makes me wonder about everything and nothing. After a while I see Jeku getting back down, this time on his ass sliding some of the times and I can’t help but laughing all of his way down. I love my adventurous monkey. And I’m well aware of the fact that his mother and maybe even mine would frown upon this kind of behaviour, being on a journey so far from home, running around in your knickers with an extra lens in it all because you want to check out some hole that you saw in a hill. I can already hear them say “But what if something happened? And you got hurt or bitten or whatever.” But that’s not our way and it makes me damned proud seeing his smile on his return and hearing that when he entered the caves that there were hissing and humming sounds. There were a shitload of snakes and wasp nests inside those hills and off course, it’s frigging hot during the day here, where else would those critters go to?

You may think you’re alone in a place, but most of the time you are not. Point proven this evening again. After Jeku got back, we made ourselves a meal when all of the sudden a jeep stops next to the tent. Two people get out and introduce themselves, one is the owner of the Husky Motopark in Tbilisi and the woman is from the French embassy. I know the Motopark because when we were stuck in Tbilisi, I looked up if we could have rented some bikes for a couple of days but in our budget it was too expensive. He’s interested in how we got there and when Jeku shows our route on the map, he clearly lifts an eyebrow, stating “With those bikes? Hmmm, impressive.” (It wasn’t, really, just nice allroad worthy trails. I’ve seen videos of the extreme stuff this guy does, I think he was being polite.) After a while he clearly gets uncomfortable saying we should get in the tent and lock up everything because this is snake valley. Jeku and I burst out in a laughter saying he already met the snakes up in the hills and the guy is looking at us as if we’re impossible to save from imminent death. They both bid us farewell with an open invite to come and ride with them whenever in the future. (That is if we’re still alive.)

We’re enjoying the rest of the evening until Jeku has enough of all the bugs biting him. I’m a real lucky girl since I can get bitten by any kind of six/eight legged creature without having any itchies. So I’m sitting rather by myself in the dark, enjoying a last sip of whiskey before going to bed. Admiring the full moon. The second one since we set off on this trip. I enjoy the comfort of the silence this evening, it’s something I can only find abroad.