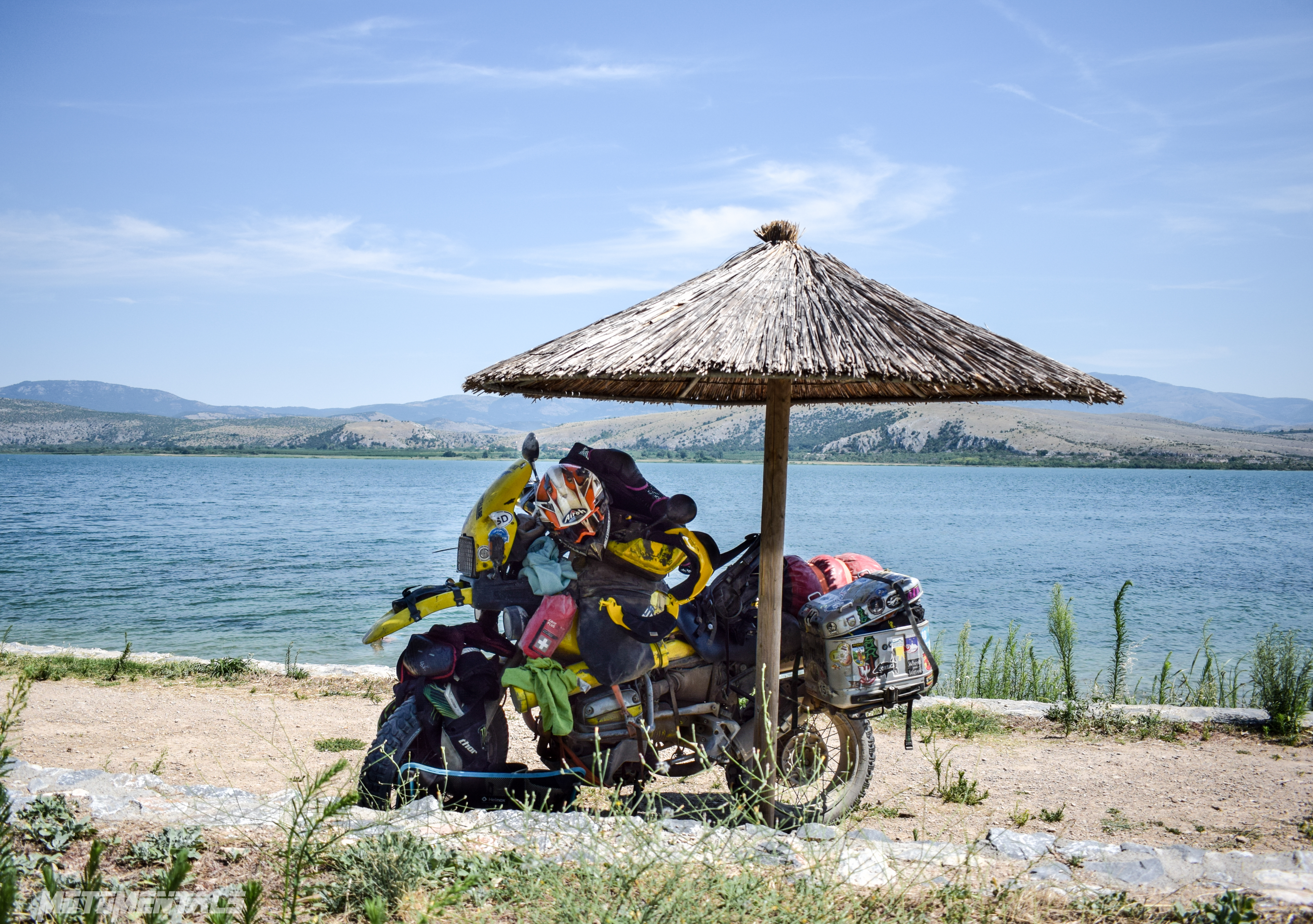 So we got to spend the night underneath the overhang of the small restaurant and we made sure that we were up before the first customers appeared, it was the least that we could do. The same people which we had a chat with last night over a beer, mostly with gestures and pointing, now come in for a cup of coffee. I love seeing how these small communities stick together and have such an active social life. We also buy some hot beverages to get our gears going because today we’re going to Greece! 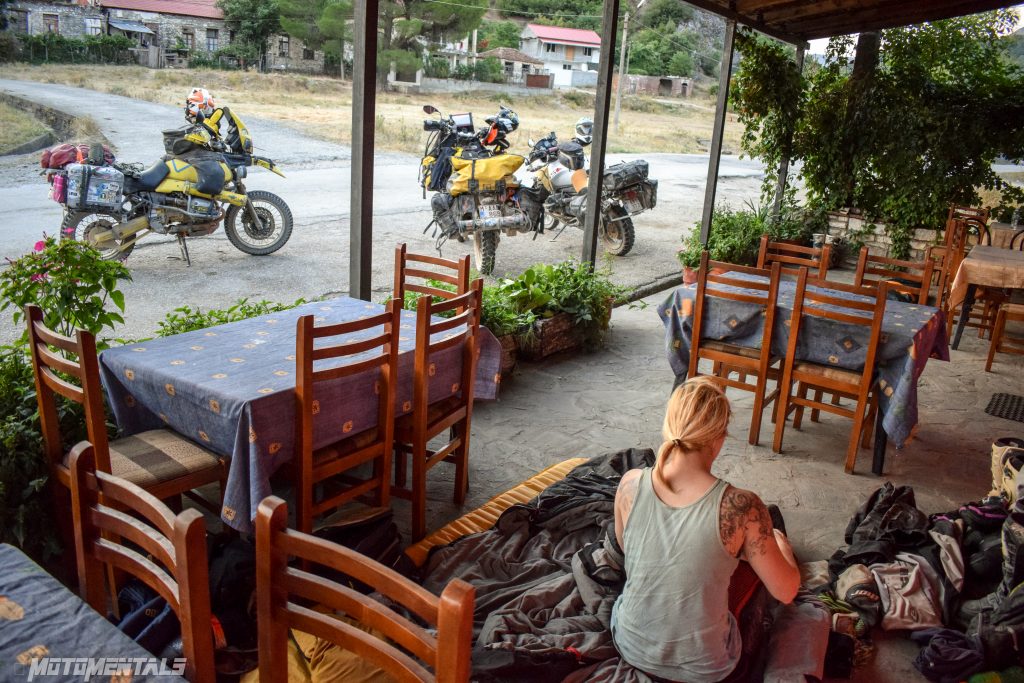 The officer at the Albanian border post wants to know where we had entered Albania because apparently our passports aren’t registered into the system. Maybe he thinks that we crossed into Albania illegally by taking some back road trail in the mountains, yet we’re able to convince him that we did cross in Vermosh by all the details that we’re able to describe and showing the pictures that we took. Also I’m actually not that impressed by his strange question because when we crossed the border from Croatia to Bosnia an officer let Louis just ride by because he had his passport between his teeth when arriving at the booth. He didn’t want to check that saliva covered passport! So Louis wasn’t registered into any system there as well. I’m still so uninformed about this, I’ll check this out when I’m back at home. So long story short, we made it to Greece! 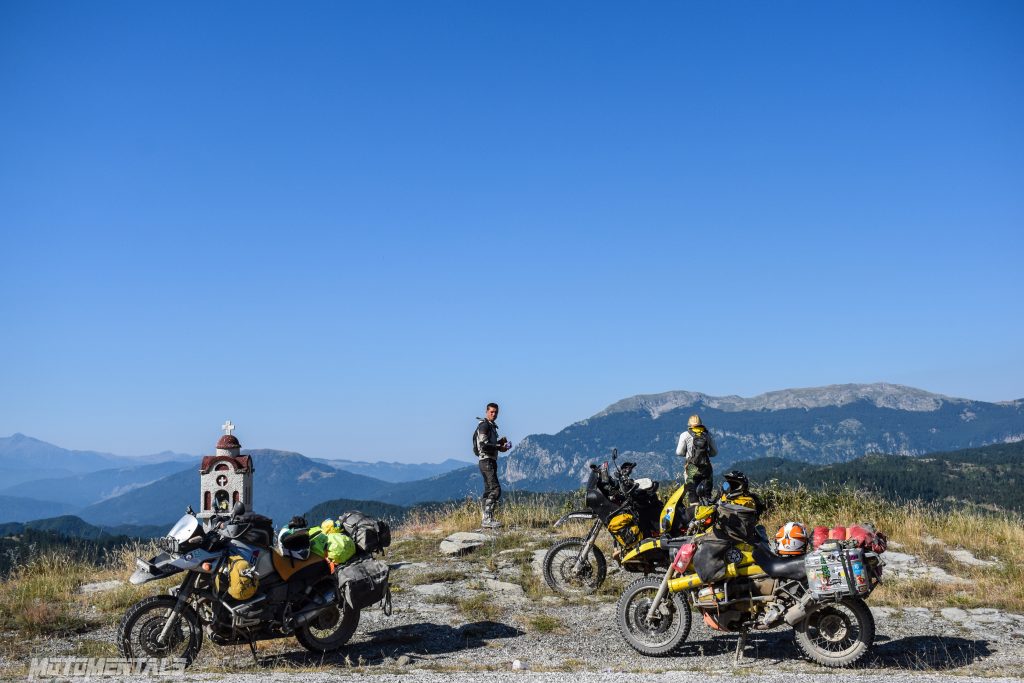 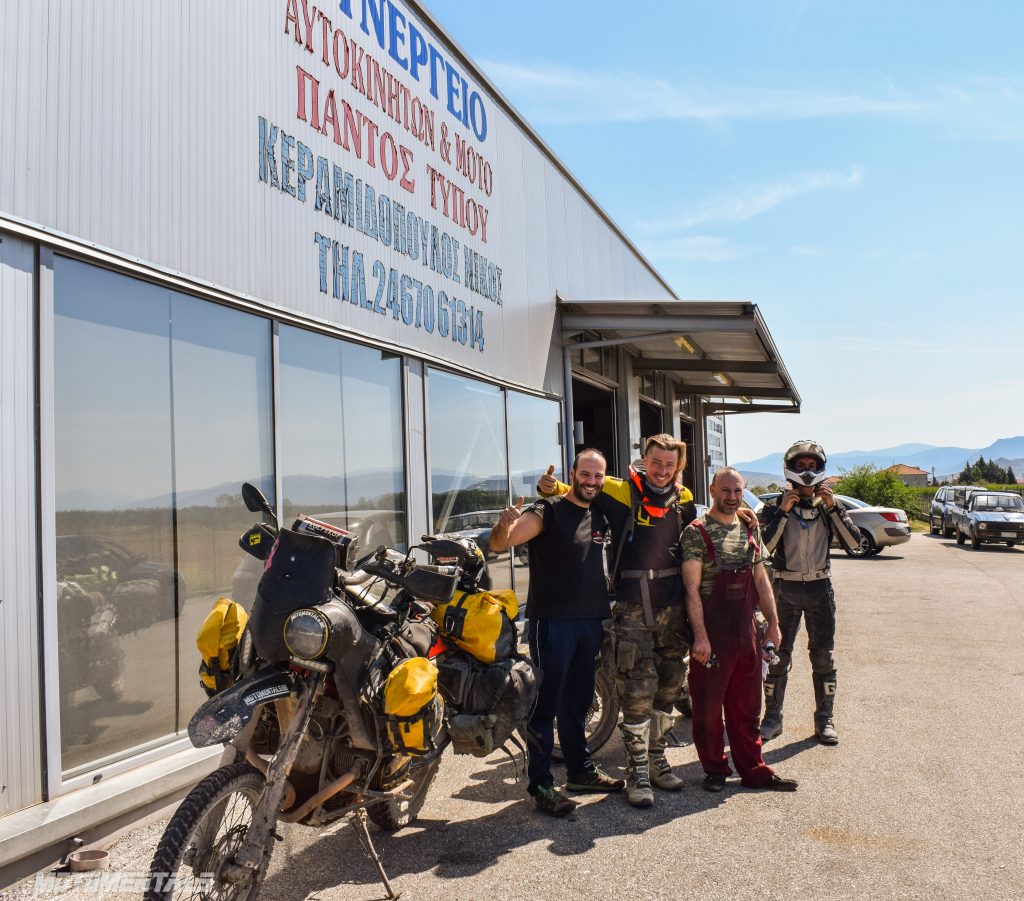 During a fuel stop we take the time to check out the map and find some lakes nearby, lakes mean water and we just want to chill out this afternoon. Jeku found a new fuel filter to mount in a car garage, and just for the mention, the Greek people here were so friendly. At first they didn’t even want to take the money for the fuel filter, it might have been because we just reeked and looked exhausted/terrible after spending almost eight days in the Albanian heat and only had some river washes… A few hours later we arrive at lake Vegoritida and find spaces of shade underneath Hawaiian parasols! We’re going full tourist mode, sunbathing, swimming and enjoying the sunset, so it’s Drambuie! 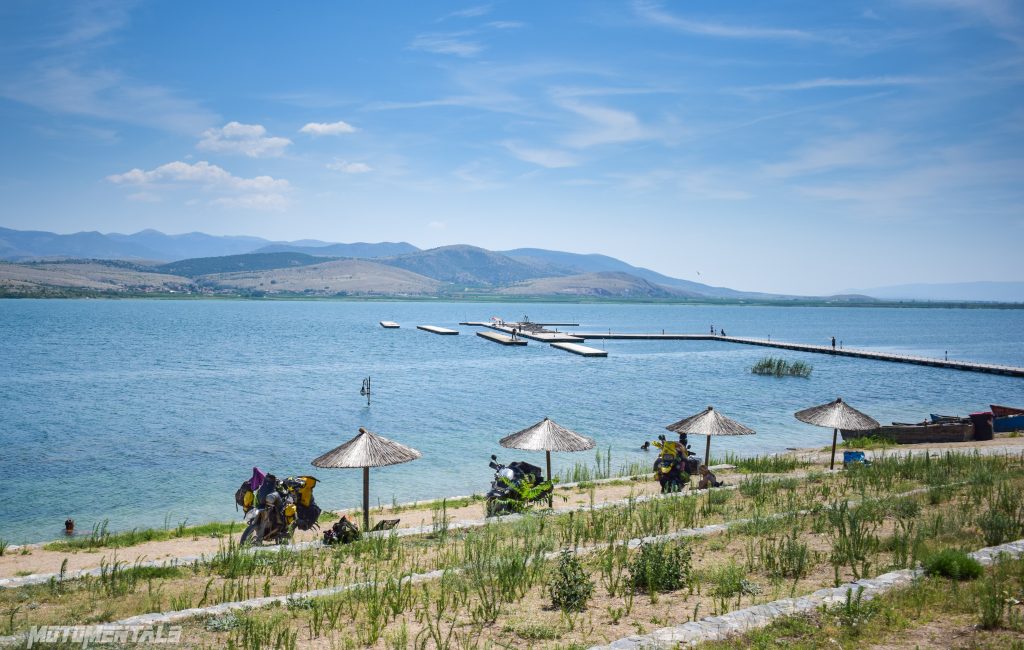 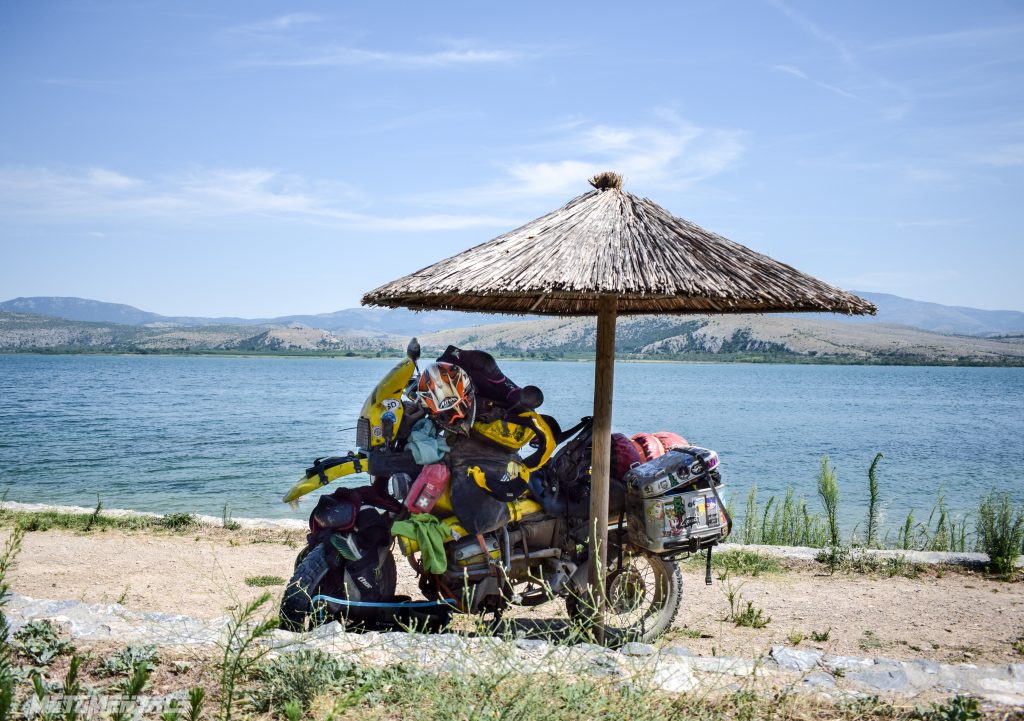 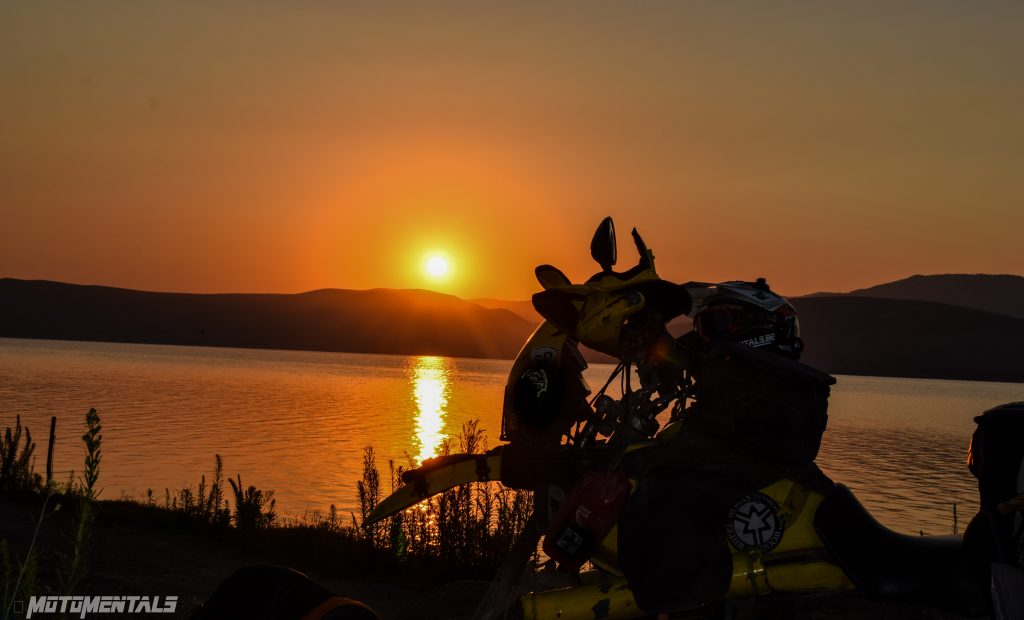 After sunset everything goes quiet. I love these evening and nights. The area is free from bugs so we’re sleeping under the stars again. My companions fall asleep early because they’ve been swimming and chilling all day in the water. I’m still up in the dark of night, enjoying the silence and the reflection of the moon in the water until partying Greek youngsters arrive, they are obviously very drunk and have no idea what to think of three foreigners sleeping next to their bikes. I see they are very curious about us and they do a little challenge to see who dares to get the closest to us. It’s hilarious. The toughest one of all comes tiptoeing towards me, no idea I’m still awake. When he’s close enough, I calmly ask “Yes, can I help you? Maybe predict your way back in the stars?” He’s startled and without muttering a word he flees back to pack. They are wildly amused by his retreat and after a quarter of an hour they leave with the car. Maybe I should get to sleep too but I need to pee so I get up and walk towards the lake. This time it’s my turn to get a little startled, I hear the flapping of big wings that got disturbed by my sudden presence and I hope for the fact that there are swans resting just near us. Hoping they won’t bite my buttocks I hurry back to my sleeping bag and fall asleep. 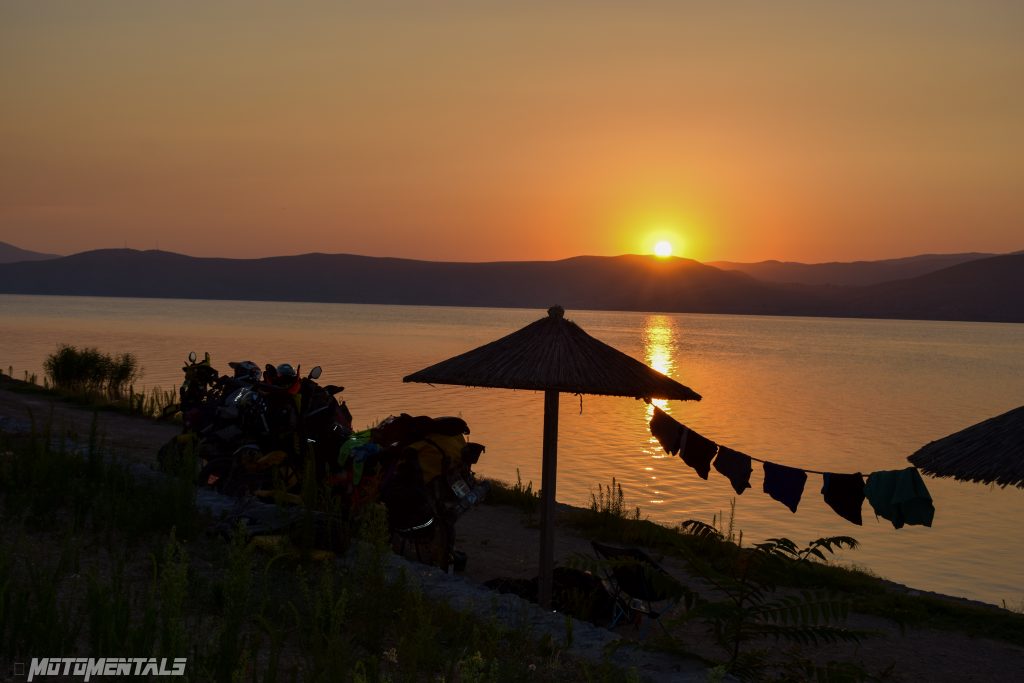 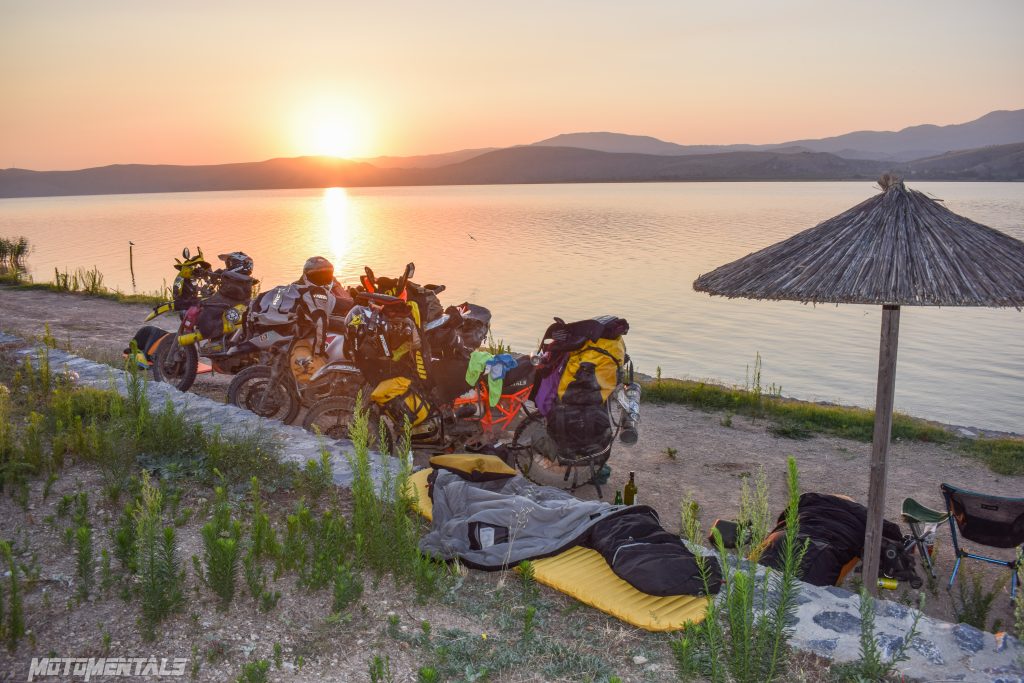 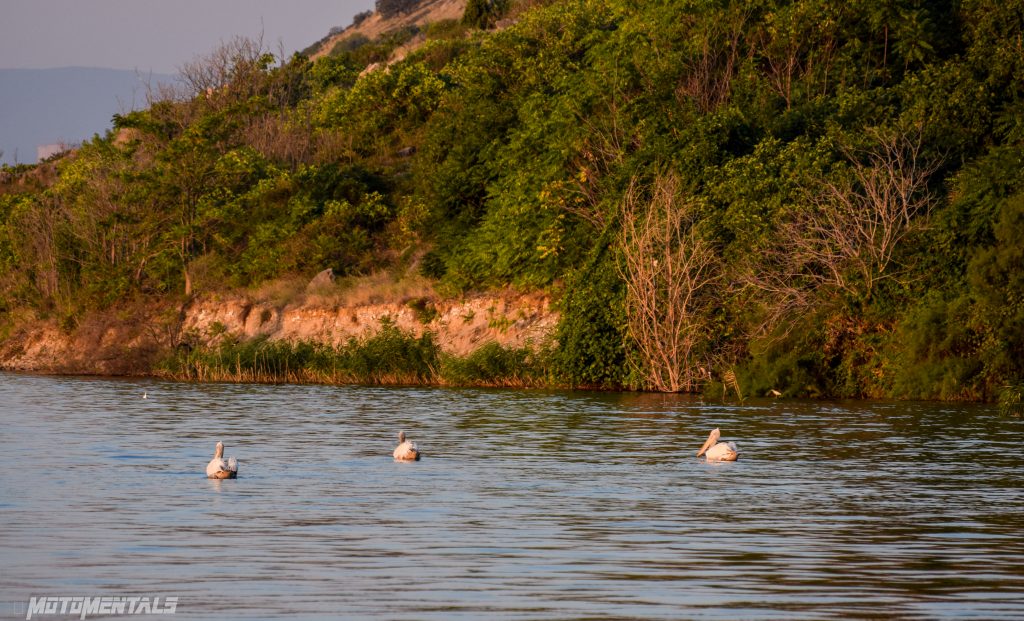 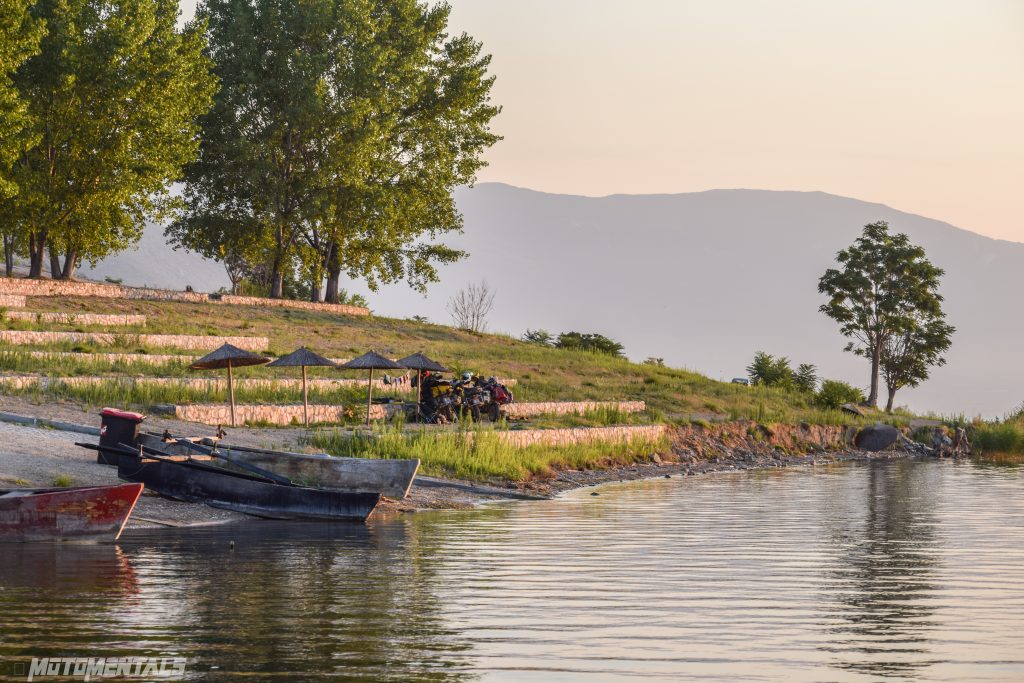 Jeku wakes me up kinda roughly, “Jess, you gotta see this, you’ll love it.” Turns out my swans were pelicans! I’ve never seen a wild pelican before, they are huge and majestic when flying. I smirk when I think of this night. Today is promising, we want to cross Macedonia, another country I’ve never been before. Yet I have to disappoint you, we only have pictures of murder go-carts equipped with buzz saws which we’re featuring in a special post and none of the country. We enjoy the winding onroad ride so much (read, speed limits are questionable) that we reach the border of Kosovo without realizing it. All three of us agree that one day we’ll come back and give Macedonia the proper treatment it deserves, what I can tell you for now. If you don’t mind a little bad asphalt, they’ve got a shitload of mountain passes to ride fast. 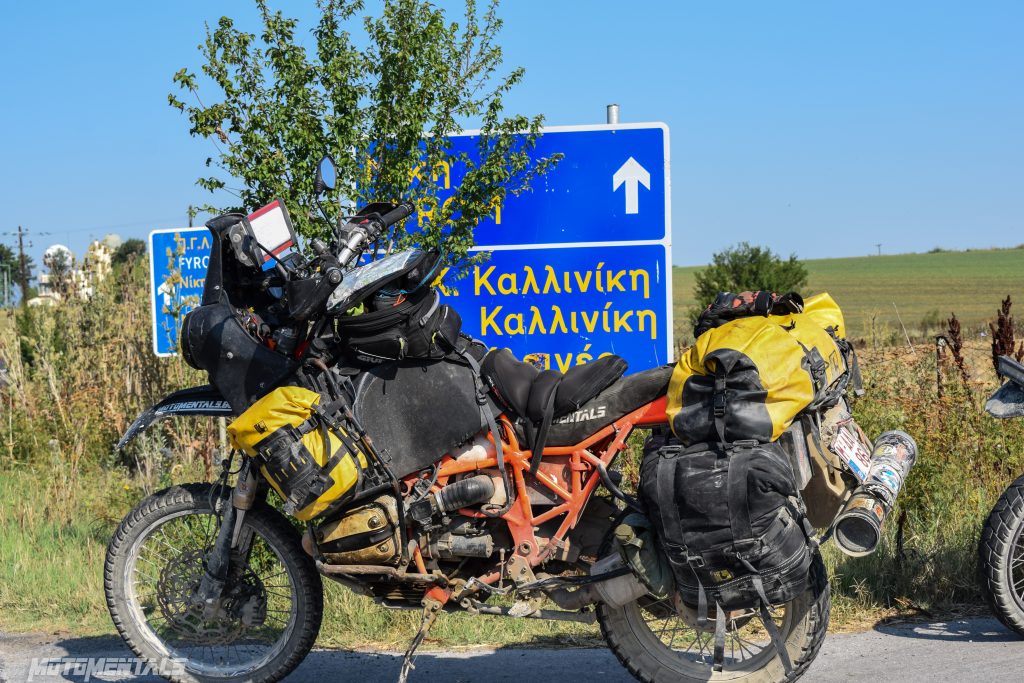 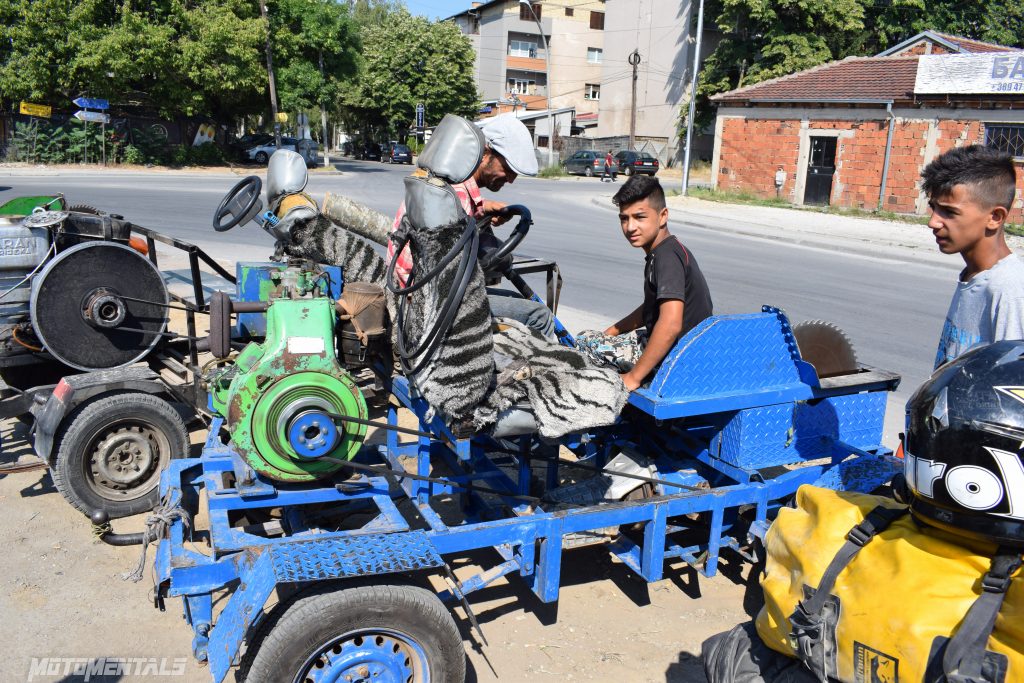 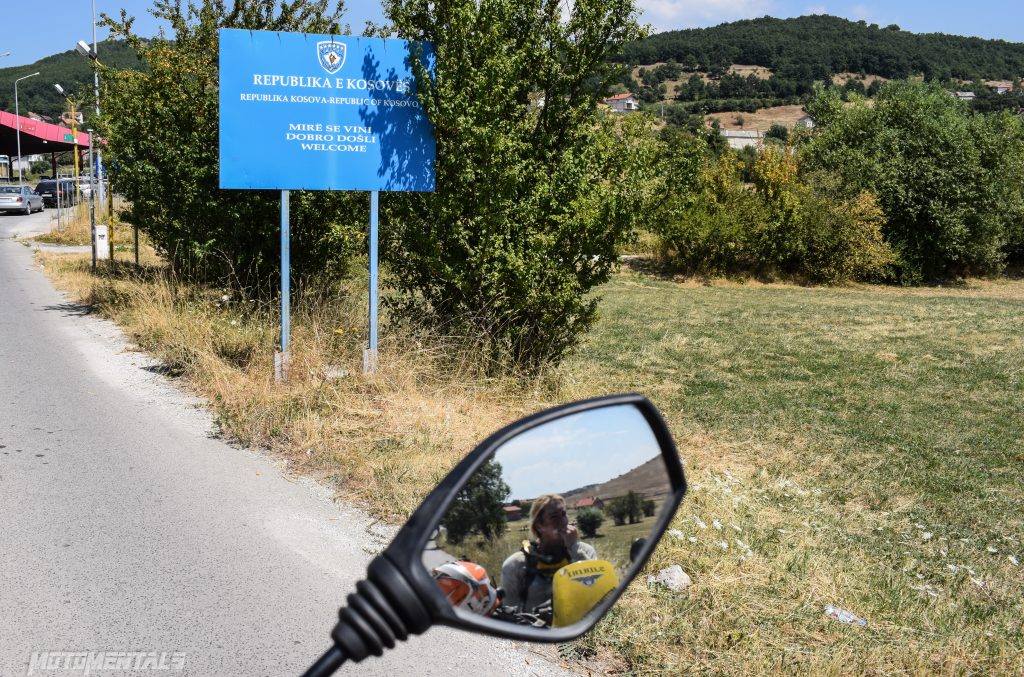 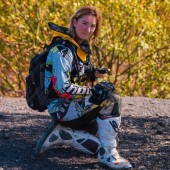 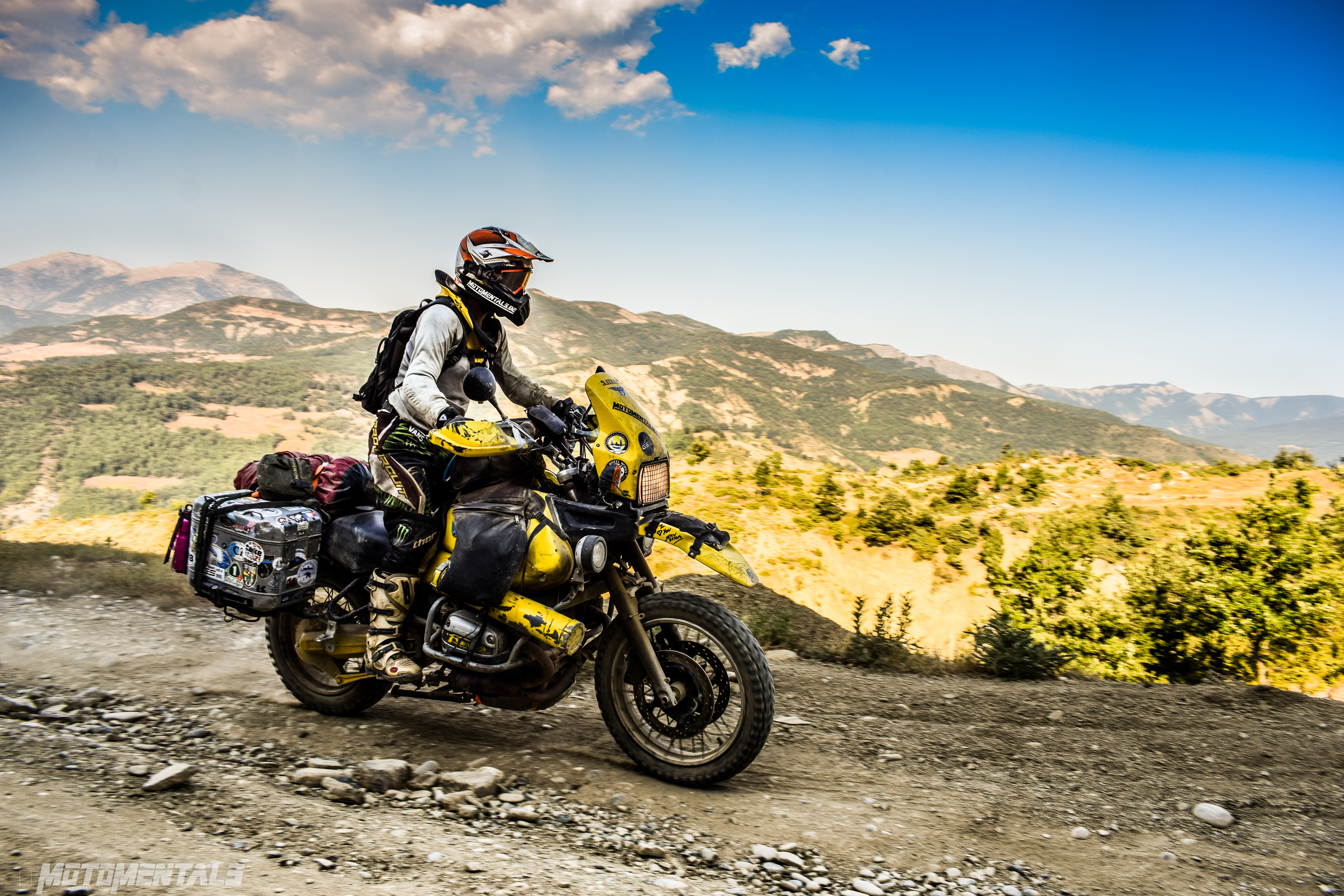 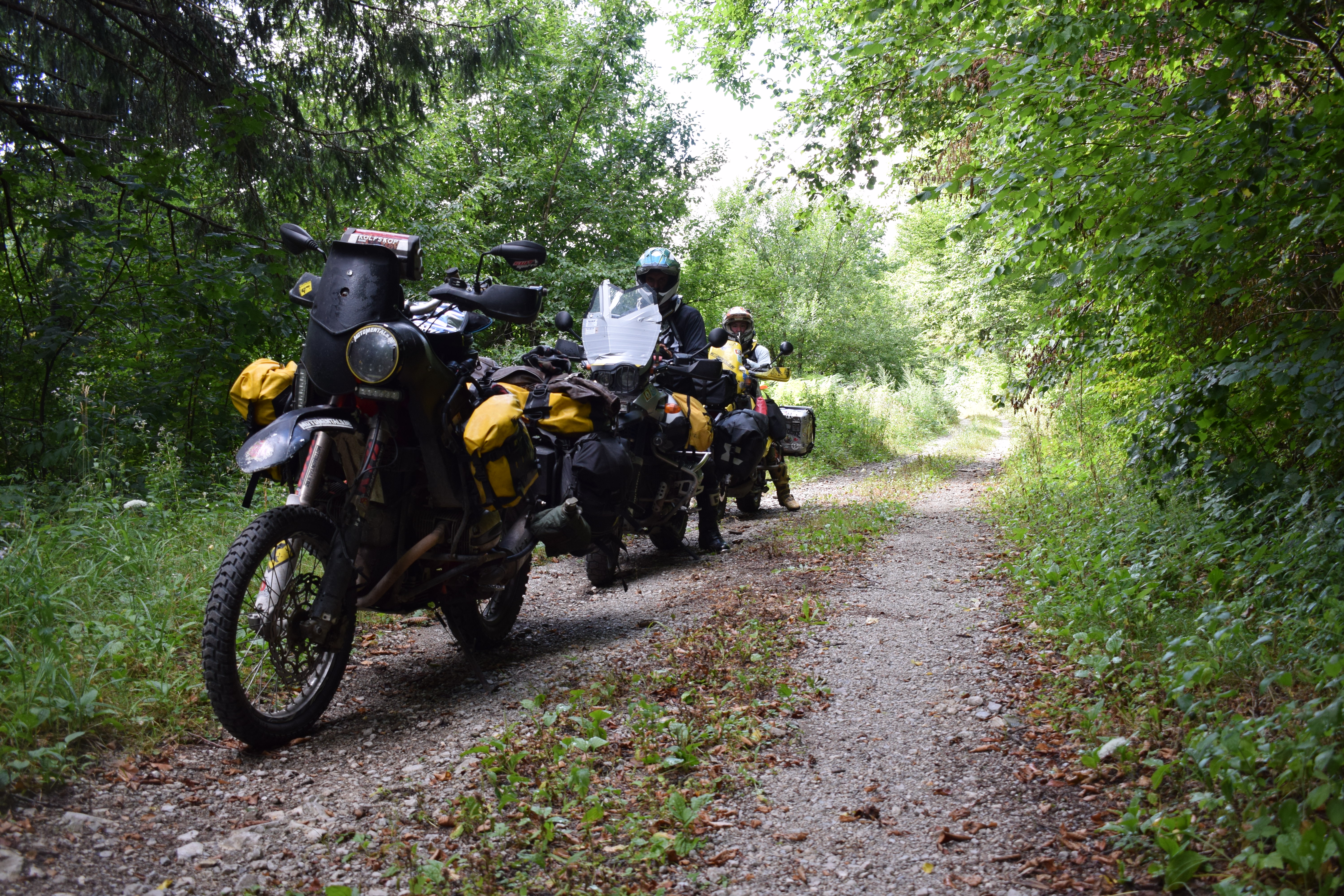 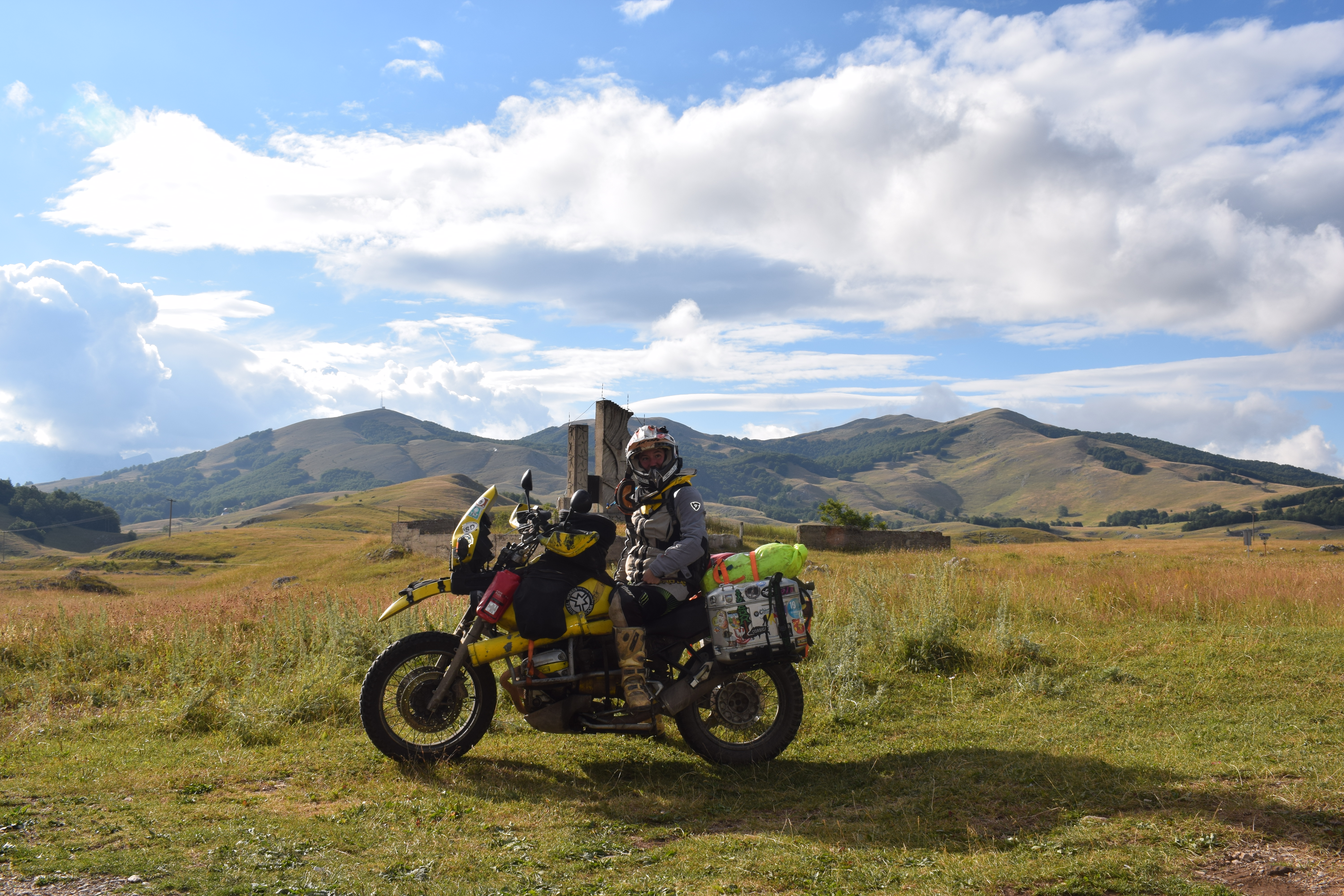 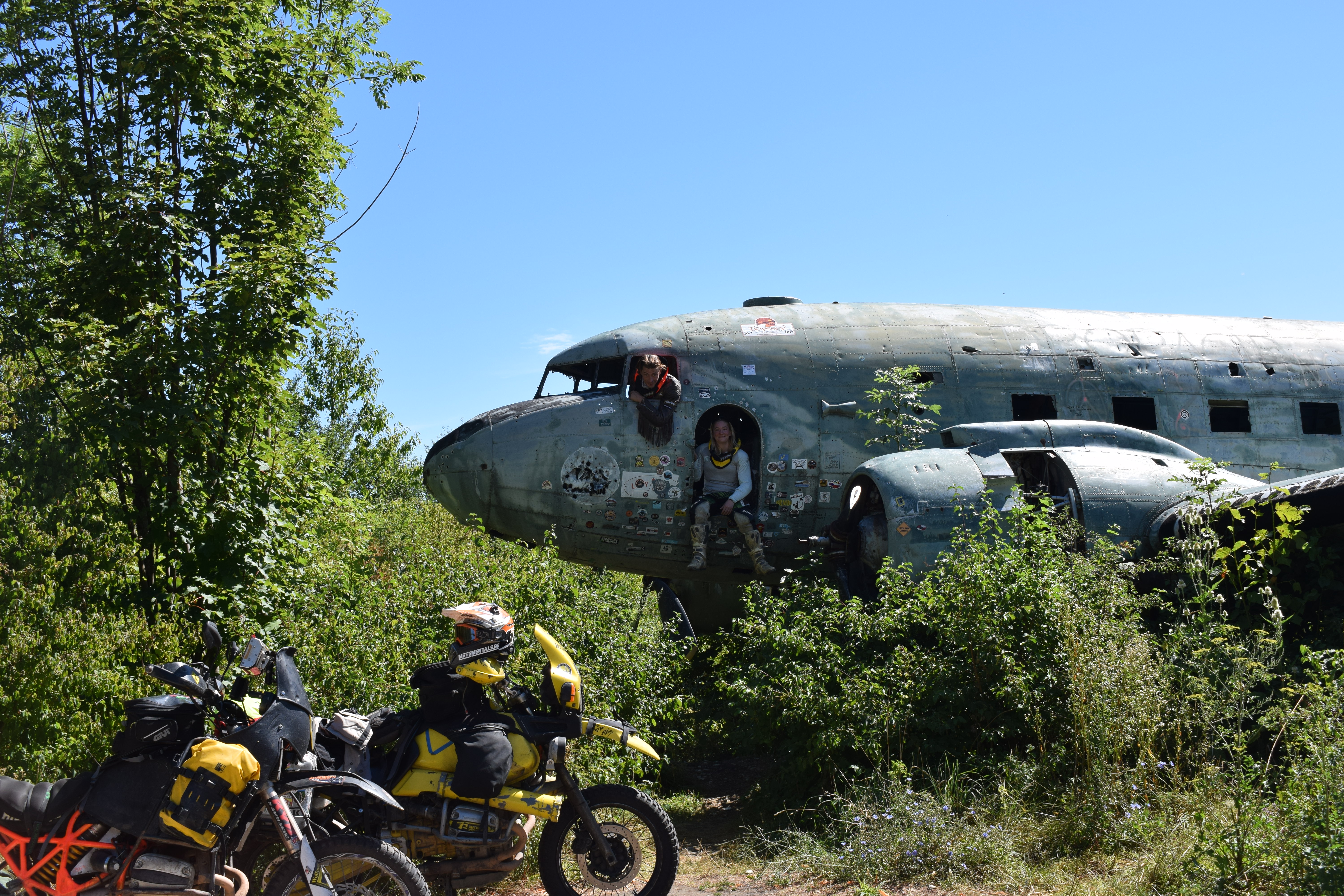